After the Ulster Transport Authority closed the former Belfast & County Down Railway mainline from Belfast to Newcastle via Comber in 1950, the old double trackbed from Belfast to Comber was left in place by the Northern Ireland government. Unlike many other closed railways the line ran through mostly urban and suburban areas, so rather than the usual practice of the time of selling off the land the NI government reserved the old trackbed for future transport use.

Dundonald station in 1933, looking towards Belfast.

One proposal was to run a Motorway from Belfast to Comber along the trackbed. The proposed M7 motorway from Belfast to Newtownards never saw the light of day as all motorway planning and construction in the North was suspended by the direct administration in the 1970s as a result of the outbreak of the Troubles. In the meantime the abandoned route returned to nature and was being maintained by volunteers as a nature reserve.

In 2003 the NI Water Service constructed the Knock Valley Relief Sewer. This was installed from Ballymacarett to Dundonald resulting in substantial excavation along the path. Subsequently funds were provided by the NI government to pave the trackbed with a hard surface. At the same time the route was first placed under consideration by the NI Department for Regional Development (DRD) as a possible route for their proposed Rapid Transit system for Belfast which is to be run using articulated (“bendy”) buses. 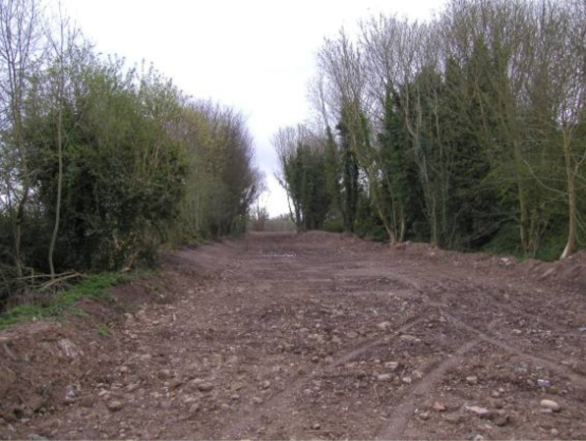 The trackbed was by now called the Comber Greenway and was extended to Comber in 2008. The DRD proposal to use the greenway as part of the Rapid Transit Busway route was vigorously opposed by local residents who persuaded several local politicians to support their protest.  A campaign group known as the Belfast Comber Greenway Group was set up to co-ordinate the opposition to the Busway proposals and to lobby local politicians. The key arguments against using the Greenway for the proposed Busway were focused on the supposed high cost of a Busway and the elimination of an “eco-friendly” method of transport and recreation.

Near Dundonald station today with Greenway in place

Their lobbying efforts proved successful. Local MLA Dawn Purvis raised the issue at Stormont in 2008, where she denied the proposed Busway would bring any benefit to commuters. By 2011 the opposition to routing the Busway on the Greenway meant that the DRD decided to re-route the Busway onto the Newtownards road, prompting local MP Naomi Long to state:

“This is a major step forward for the community in east Belfast. I am delighted that the Greenway is no longer the Department’s preferred route, as it provides such an important resource for east Belfast. I would encourage people to actively engage in the consultation as it is a valuable opportunity to make their views known and to secure both the future of the Greenway free from development and also investment in high quality public transport in East Belfast, two very important objectives.”

With the future of the Comber Greenway secure for now, Sustrans are now looking at extending the Greenway from Comber to Newtownards on the trackbed of the former railway line to Newtownards. Sustrans confirmed at a meeting of Ards Borough Council in January 2013 that they were pushing for such an extension out to Newtownards and further to connect to the ArdsPeninsula. Meanwhile the proposed Busway will now run along the Newtownards Road, removing one or more existing traffic lanes.

The former rail route is now unlikely ever to return to public transport use either for buses or trams.