Foynes in Co. Limerick is one of Ireland’s busiest seaports and handles 10 million tonnes of cargo every year. That number is rising and at present all traffic in and out of Foynes is by road. Growth of the port requires enhanced transport links, so as part of their master plan up to 2041, the Shannon Foynes Port Company want to see the restoration of the direct rail link from the port to Limerick.

In addition, the rail link to Foynes has recently been added to the European Union TEN-T core network, as can be seen below: 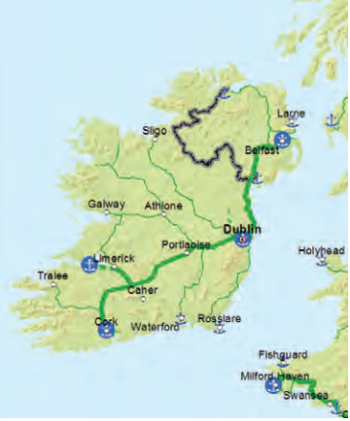 The rail connection from Foynes to Limerick has been mothballed by Iarnród Éireann since 2001, with the last known movement on the line being a weed spray train in 2002 and an inspection car in 2003.  The line is nearly intact but overgrown in parts. A full relay and a likely re-signalling of the line would be required in order to re-establish level crossings and most importantly, to allow the running of IÉ’s 201 and 071 class freight locomotives.

It’s understood that the Shannon Foynes Port Company have paid Iarnród Éireann to take the proposals to re-open the line to design stage. If these proposals go ahead to construction then it’s not just Foynes Port that could benefit from having railfreight back on the line. New management at Iarnród Éireann are understood to be more favourable to freight than in the recent past, so will no doubt be looking to new profit opportunities.

The trackbed on the Robertstown and Adare viaducts and the existing level crossings would need to be renewed. As can be seen below the Robertstown Viaduct is in quite a poor condition and will need significant works to allow trains to run again:

Adare viaduct is not in as poor a condition but will also require work. Since the photo below was taken in October 2012 a fence has been erected across the line at the end of the viaduct:

Adare viaduct in October 2012 by kind permission of the Wanderer http://thewandererphotos.smugmug.com/

The level crossings on the line will need to be renewed, ideally the level crossings should be automatic and remotely controlled from CTC in Dublin; however some of the minor crossings could be manned locally by the proverbial man with a van as and when a train is in transit, to save on cost.

The photos below show the condition of Adare and Askeaton level crossings in October 2012:

Adare level crossing by kind permission of the Wanderer http://thewandererphotos.smugmug.com/

Askeaton level crossing by kind permission of the Wanderer http://thewandererphotos.smugmug.com/

As said before, Foynes port is growing rapidly and there are many opportunities for rail freight in the Shannon Estuary area.

Atlantic Fuels are building one of Europe’s biggest fuel terminals at Foynes.  Along with CPL’s new biofuel plant – see http://www.cplfuels.ie/news/2013/06/142-jobs-to-be-created-by-new-cpl-industries-bio-fuel-plant-at-foynes  – Foynes is ideally located for mass transit of fuel across Ireland by rail. 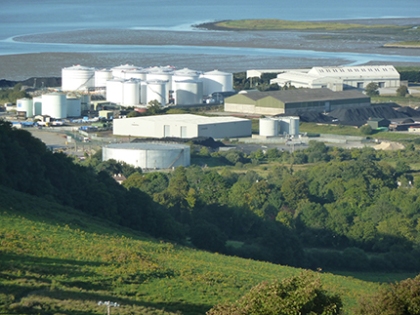 The Pallas Green Zinc mine in Co. Limerick is at an advanced stage of development; the revitalised Foynes line could play a major part in shipping Zinc ore from the mine. Goulding Fertilsers have their main national distribution point at their Askeaton plant. Further potential clients could include the Pfizer baby formula plant at Askeaton, Kerry Foods in nearby Listowel and the possibility of timber traffic from North Kerry and West Limerick, all of which means that the restoration of the Foynes line for railfreight could be very profitable for Foynes Port, Co. Limerick and North Kerry, and for Iarnród Éireann in general. Freight from Foynes could be routed to the Belview freight terminal in Waterford, to Ballina via the Athenry-Claremorris line and to Dublin port.

The biggest issue at present is how should restoration of railfreight on the Foynes-Limerick line be funded? The original estimates from Iarnród Éireann for restoration of the line were apparently approximately €45m. Revised, more realistic, estimates of cost are currently €7-9m. Perhaps Iarnród Éireann may consider a joint venture with the Shannon Foynes Port Company regarding ownership of the line. In addition funding from the European Union may be forthcoming as the railway line to Foynes is now part of the TEN-T core network.

Considering the expansion of Foynes port over the next 30 years, an investment of €7-9m to re-instate the Foynes rail link is small beer compared to the likely cost of upgrading the roads out of Foynes to carry the anticipated increase in cargo traffic.

So what is the next step? The Limerick TDs are Dan Neville and Patrick O’Donovan of Fine Gael and Niall Collins of Fianna Fail. The time is now for these local political stakeholders to push for investment in local infrastructure. In many respects they should be pushing at an open door as Michael Noonan the Minister for Finance was born in Loughill, near Foynes. A relatively small investment in renewing the track and signalling on the Foynes line would boost the local economy and help protect jobs.